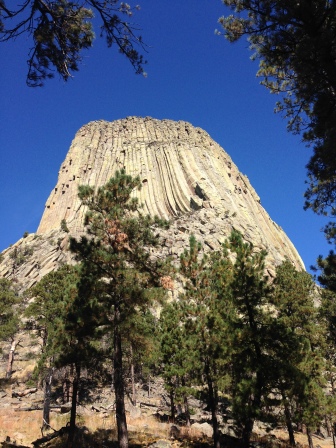 There was one more thing we wanted to see before Yellowstone, and that was Devil’s Tower, Wyoming. Annoyingly, it was rather closer to Deadwood than we would have liked – meaning we would have to do our sightseeing before our long drive of the day, rather than after (our perfect rhythm for driving days was 2 hours driving, breakfast, @4 hours driving, sightseeing, then a final 1-2 hours driving to our destination).

Happily we were able to make a bit of progress before breakfast, turning up in Sundance WY to a really nice and friendly cafe (Bigby’s on the square – if you get the chance to go, do try their sausage biscuits and gravy!) in time for a good breakfast. 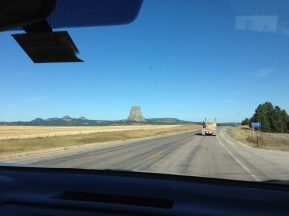 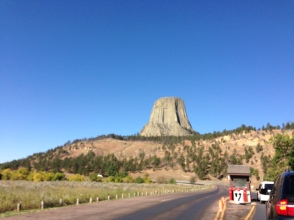 We could see Devil’s Tower way before we got there – soaring straight up into the blue sky. We were under the impression that it was a giant volcanic plug, but we discovered when we got there that it could also be some other volcanic feature but, because of its age and possible erosion, we might never know for sure. What was clear though was that this area has always been a sacred site for native Americans – personal testimonies of going to the Devil’s Tower for hunting parties were published on plaques around the tower, and prayers and offerings fluttered from trees.

For most of our walk around the base of the ‘tower’ though, we were mainly freaked out by the knowledge that rattle snakes frequented the area. We already knew about this, and had seen the signs warning people not to approach snakes, but we still had the fright of our lives when we actually came face to face with one.

At the time we had no idea whether the snake was venomous or not. All I knew was that as I followed R, I looked to the side of the path and saw, behind a tree trunk, not a foot from R’s feet, the loose coil of a huge, camouflaged snake. Its head rose and it looked quizzically at me. I didn’t quite scream, but R certainly knew I’d seen something. I told him to go ahead – quickly – before telling him (as I backed away) what I could see. I’ve never been that close to a snake without a strong pane of zoo glass between us, and it was almost shocking to realize that they’re just out here, slithering around. Luckily, the snake seemed to just want to cross the path, so we waited for it to do this at its own pace and, as it slid quietly into the grass on the other side, I rushed to rejoin R.

Turns out, it was a bull snake – so not venomous at all. At the time we were too scared to take photos or videos, however, luckily we’re not the only ones to encounter this snake. These Youtube videos from two years ago seem to be of exactly the same snake!

Anyway, we made it around the tower unscathed – with just one more sight of what I think was definitely a rattle snake, curled up on top of a rock a little way away from the path. The views were spectacularly beautiful: a green valley swept down from the trees surrounding the hill, and everything seemed golden in the autumn sunshine. But then it was back to the car and on to our next destination. 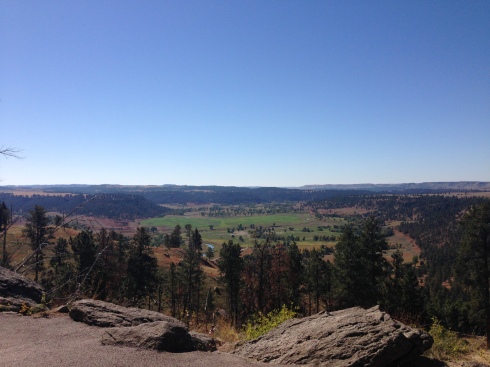 We had changed plans the night before and instead of planning a route to Cody, on the edge of Yellowstone, we’d been attracted by the small town of Greybull and an independent motel there. It was slightly further from the park than Cody, but that would give us more flexibility in terms of breaking for lunch etc. So R drove us back onto I-90 and we drove for about four hours.

Selections from our driving music – nods to what I think of as more trad. country today:

Buffalo WY was a nice little town to break our journey – we stocked up on water and gas (and some much needed fruit), and grabbed sandwiches in a cafe/gift shop.

But the real surprise of the day for me was Bighorn National Forest. It was just so beautiful. I don’t know if it was just that we were driving through it at the ‘golden hour’ – we’ve arrived at so many beautiful places just as evening was coming on, but everything seemed defined: the colours of the hills and trees warm against the sharp shadows of cliffs. Again I felt it had that wild and sacred atmosphere I’d felt at Devil’s Tower. I almost expected to see Native Americans hunting in these hills, and felt again how wrong it had been to take this land away from them. Now, as the owner of our motel informed us, these hills provide recreation and hunting for the people of Greybull and other nearby towns. 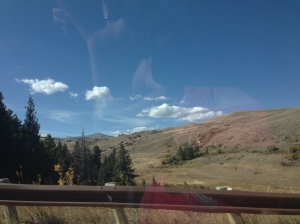 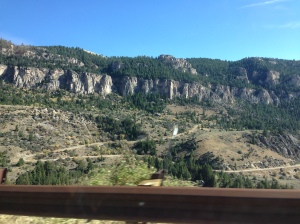 After the bright lights of Deadwood, Greybull seemed very quiet, and small. Our motel backed onto the railroad tracks, across which was very little indeed. And when we walked to find a restaurant, we found that the town petered out pretty quickly. But we found somewhere to eat, then headed to bed early, excited to be heading into Yellowstone the next day. 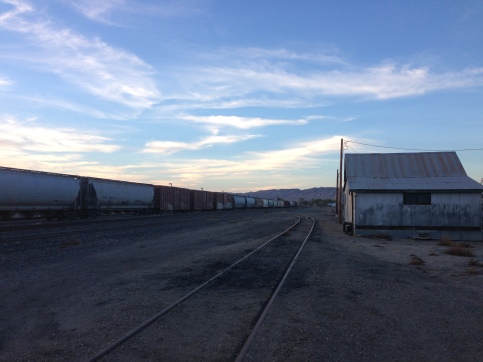 1 thought on “Western road trip: Devil’s Tower and the way to Yellowstone” 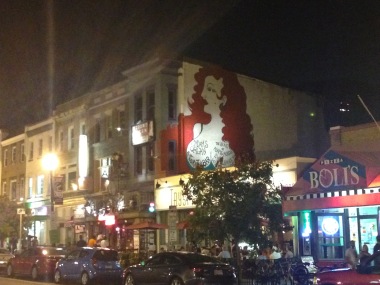 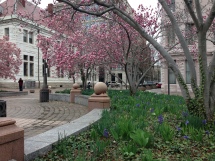 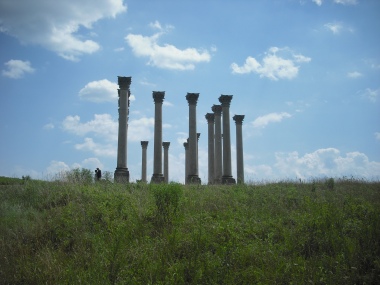 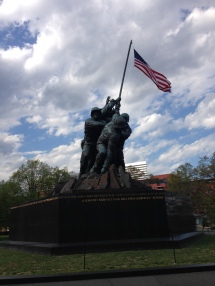 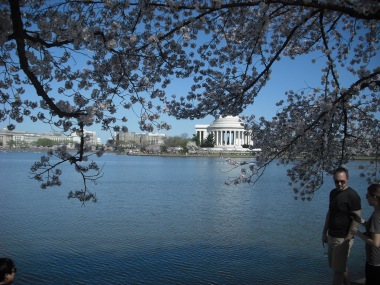 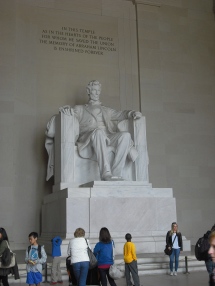 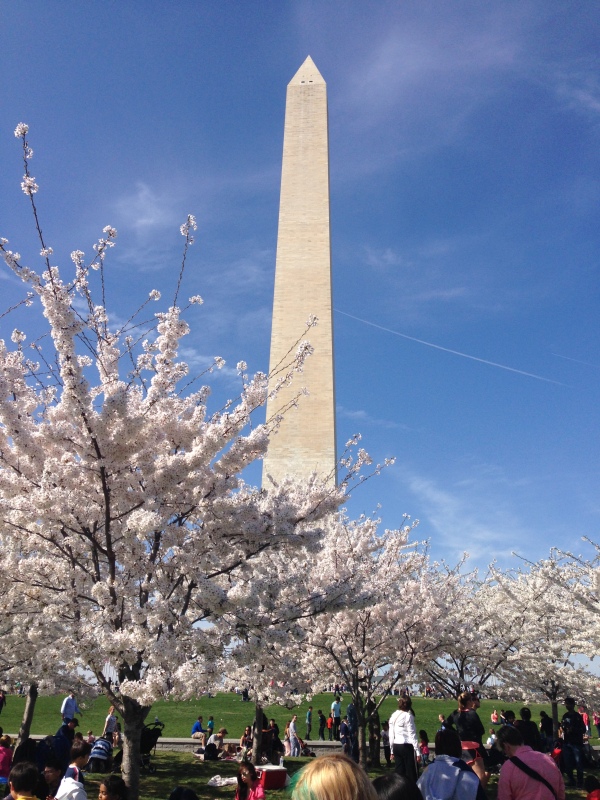