News about the British election has been fairly low beneath the fold in the WP over the past few weeks; events in Baltimore and Hilary’s EmailGate have been dominating the news. So I was surprised to open my laptop this weekend and find Ed Miliband was the first topic ‘in the news’. 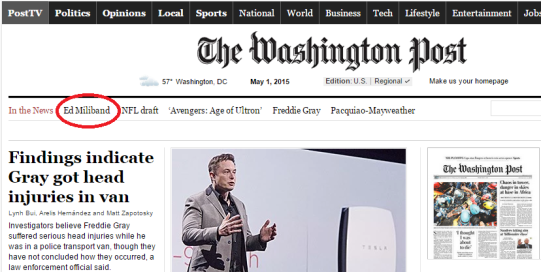 The WP’s version of Miliband’s story makes much of his Jewish roots and Holocaust survival parents, but the thing they focused on most was the way that Britain had – unusually in their view – given a politician a second chance. Of course, America is famous as the ‘Land of Second Chances’; it’s always been said that you can pick up and start again over here with little to no stigma. The backhanded compliment being paid in this piece is that, in changing their minds about Miliband, the UK has rediscovered a ‘faith in the powers of redemption’; but surely the movement of Miliband from zero to hero is just another example of the British love of an underdog? (And evidence that you can never predict who teenage girls are going to fall for… Milifandom, by the way, was not discussed in this piece – perhaps it was just too strange for this reporter).

Either way, the thing that Americans seem to love most about Miliband – and presumably the reason this reporter was so pleased about his ‘second chance’ – is his personal connection to America. Miliband’s family lived in the US for a while when he was young, a fact which he refers to often in relation to his fanatical support of the Boston red sox. While this probably has a tendency to turn the British public off, it plays really well over here – could there be anything more American than a love of baseball?

The other story that has captured Americans’ imaginations is that of Farage, whom the WP refer to as Britain’s ‘Far Right Firebrand’. For some reason the WP’s reporter is more optimistic that support for UKIP is waning than many British people I’ve spoken to about this. While reporting one South Thanet resident as agreeing with UKIP about immigration, this report ends with the comments of someone who probably showed up as pro-UKIP in past opinion polls but has since changed her mind, realising that Farage is exploiting the depressed state of her constituency for his own political gain. This nuance isn’t missed by the UKIP supporters who trolled even this rather niche American publication, accusing it of being part of the left-wing press conspiracy that insists on ‘misrepresenting’ their party.

But apart from these stories of the rise and fall of Miliband and Farage, there’s been relatively little coverage of the British election. Though people in the UK will probably see this situation as symptomatic of Americans’ famous disinterest in the rest of the world – their lack of passports and dislike of foreign policy debates – an interesting explanation was put forward by the WP, who accused Britain of this same disinterest: of ‘turning inward’. The days of Blair and George W’s special relationship are long gone, and the US is feeling rather abandoned by the UK in the world of foreign policy. The UK used to punch above its weight; Cameron’s austerity cuts to defence have rendered the UK far less useful and significant to the US’s foreign engagements, and even before you get to a discussion about the SNP and Trident, Miliband (despite his love of baseball) has already shown himself to be part of a coalition of the unwilling when it comes to US action in the Middle East.

As someone who opposed the Iraq war and viewed Blair’s closeness to the US hawks with dismay, I’m only too pleased that Miliband enjoys standing up to the current US administration. There are many issues with America’s foreign policy adventures, which Hilary Clinton could easily exacerbate (see Jackson Lears’s article in the LRB http://www.lrb.co.uk/v37/n03/jackson-lears/we-came-we-saw-he-died). However, I did feel some measure of shame when the WP listed the UK’s recent failures to get involved in international affairs. I’m obviously out of the loop, but it did seem to me that the recent disaster of the migrants drowning on their way to Europe prompted mainly more nasty words about immigration and a focus on our own borders. And I’m inclined to agree that whoever ends up leading the government after the election this week will end up bogged down in time consuming referenda about either Europe or Scotland.

I was brought up at a time when we were told that the world was shrinking. My generation believed that when we grew up we could live anywhere. We were encouraged to have penfriends around the world, to learn languages, to contribute to international charity drives and to feel sympathy for refugees. And I want this philosophy back.

To achieve this, I think that we have to do whatever we can to increase living standards, enforce the minimum wage and build more council houses, so that people can have a decent job and a decent home and not feel this all-consuming jealousy of the phantom immigrants they’ve been told are stealing their jobs, living in 5-bedroom houses and being given money to start their own businesses. I want people to have the stability and the confidence that they’re able to look outward and care about others again. I know this feels like this post is leading to a ‘this is why I’m voting Labour’ message – but it isn’t. It didn’t even start out as a politically motivated post. But however enjoyable I find an election and its trivia, these days I can’t escape how fundamentally serious it all seems to me for the future of our national character (something that sounds so old-fashioned you’d think it would be a Tory priority…).

Our response to the Boxing Day tsunami in 2004 showed how generous people in the UK can be when they feel financially secure. I just hope that whoever ends up in power over the next few years does what they can to recover not just the UK economy, but also our standing in the world. Maybe then our relationship with America would get more interesting…

Note – I anticipate that some people might question why I get to vote in the UK’s election. To be clear, we’re only in DC for 18 months, on non-resident visas – meaning we’re still residents of the UK – and we still pay tax in the UK (as well as in the US). We also have to come back in October to whatever mess results from this election, so I think it’s only fair that we get a say. I’ll write more about visas and tax in future posts (doesn’t that sound exciting?).